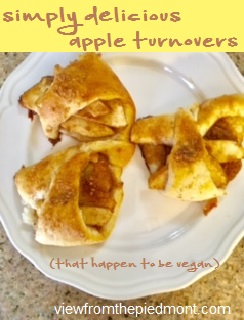 These apple turnovers are incredibly easy, and they are milk and egg free, which is great for my allergic child.

Crescent roll dough sometimes contains milk, so check labels carefully if you need to avoid it. I have found that inexpensive brands (like the ones I use from Aldi) have no milk.

My first-grader dumped the cinnamon in the bowl, so it wasn’t a dainty dash of cinnamon, and they were fantastic. I think many recipes skimp on seasonings. I think as long as you don’t get spicy (think Red Hot candies), then add plenty.

I sliced the apples, and my daughters rolled them in a mixture of cinnamon & sugar.

Unlike other recipes I’ve seen, we added several apple slices to each roll. Leftover cinnamon and sugar mixture went on top.

Normal bake time for crescent rolls is about 11 minutes, but the apples inside took longer, and I put them in a cold oven (I rarely remember to preheat, and it never makes a difference!).

Ours baked a little over 20 minutes, but definitely wait until they are golden brown. Underdone dough is not yummy.

Someone thought they were pretty tasty! She ate several!